This is not just a special geological object, breathtaking in its grandeur, the Lena Pillars is a sacred place for the Yakuts and Evenks, which is included in the list UNESCO World Heritage Site as one of the most amazing places on the planet with an untouched ecosystem.

For a long time, the path there was closed to mere mortals. Only the elite were allowed to approach the rocks, the outlines of which resembled frozen figures of people. The rest feared the wrath of the spirits. Completely fabulous, as if created by a talented artist, rocky forms will accompany you, follow you, surprise you when you head upstream the Lena.

Ecopark is worth a visit, at least to stroll along the incredibly beautiful coast the Lena River and enjoy the views of untouched nature. By the way, MTS recently launched the first free digital audio guide for the national park of Yakutia, which allows tourists with a smartphone to have a quality and interesting time.

The audio guide covers the river route along the Lena River, and the walking part – along the eco-trail of the national park with a view of the natural stone statues. The free audio tour is available for download to subscribers of any operator on the platform MTS Live. Before starting the tour, it is enough to download the MTS Live application on your smartphone for free, find the audio guide “Place of Power: Lena Pillars” in the Digital Content section and follow the route.

The wood bison nursery “Ust-Buotama” was opened in 2006 at the mouth of the river. Buotama. It was here that wood bison lived many centuries ago. It is known that the Yakut bison died out about 5 thousand years ago. But some of their relatives moved to North America and there eventually divided into two subspecies: steppe and forest. The wood bison, the same age as the mammoth, is an endangered species listed in the international Red Book. Unlike the steppe bison, it is impossible to domesticate the forest bison, they are too independent animals that love freedom.

The bisonarium in Yakutia is a step towards the revival of the bison population in their historical homeland. The first thirty wood bison were brought here from Elk Island National Park in Canada in 2006. The bison have taken root perfectly in the Ust-Buotama nursery, they feel good, they have become stronger and more enduring than their Canadian counterparts.

The territory of the nursery “Ust-Buotama” is large – about 100 hectares. This is important for wood bison, as they are territorial animals and are ready to fight for their possessions. Bison will not tolerate another species next to them in a limited area. In the taiga, they can easily coexist with other inhabitants. 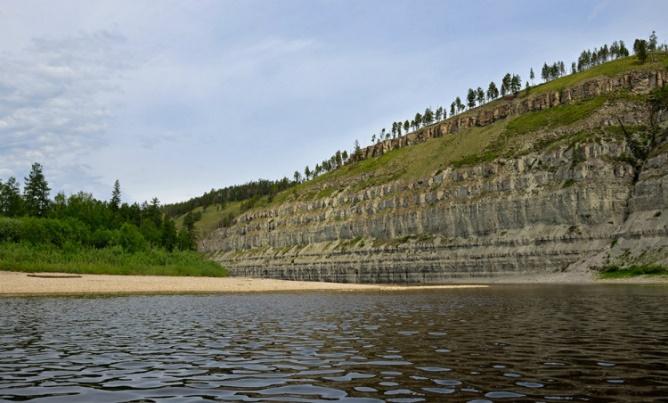 Buotama forms a picturesque valley, in many places – rocky and steep banks. Below the mouth of the river Kharya-Yuryakh Buotama flows surrounded by bizarre cliffs, they can be compared with the famous Lena Pillars. Particularly impressive are the multi-colored outcrops of sedimentary rocks, such as marls, limestones, dolomites.

Today, Buotama is very attractive to travelers. It is interesting to visit here, especially since nature is preserved almost in its original form. And one can quite easily imagine the conditions in which our ancient ancestors had to survive.

All ecological trails have the first level of difficulty. Alloys are also popular on Buotam. Fantastic landscapes, clear water, crystal air and the absence of difficult obstacles attract tourists.

For two or three days, getting into a completely different world of sounds and smells, enjoying the beauties of a mixed forest, seeing layers of permafrost that melt under the hot sun and noisily flow down, walk along a river with many rifts and meanders – more and more often nature lovers choose such a vacation. and vivid impressions. And from the top of the mountain offers stunning views of the surroundings.

At the mouth of Buotama there is a recreation center “Ust-Buotamskaya”. It can comfortably accommodate up to forty people. In the houses – from two to six places. The dining room is open. It has its own diesel power plant. And in case of cool weather, heating is provided.

This quarry is the second one of the main attractions of the country. The diamond pipe is one of the deepest in the world – 450 meters, and an outer diameter of 1,200 meters with a bottom diameter of 300 meters. An interesting fact is that helicopters do not fly over the pipe at all, as they are drawn in by an air wave.

Quarry « The world is certainly a real miracle. And, of course, there are various legends around it. The most common of these, and also the most intriguing, is said to be very dizzy when downstairs, and euphoric when upstairs. It is worth visiting this incredible place at least once and checking out this legend!