Jordan is not that popular with travelers yet, and that's a good thing: you can avoid the crowds of tourists and really enjoy the trip. And there is something to do here: explore countless biblical sights, dive and snorkel in the Red Sea — & nbsp; the spots here are incredible, fly in a balloon or paragliding over the Wadi Rum desert, ride horses or go hiking in the mountains. 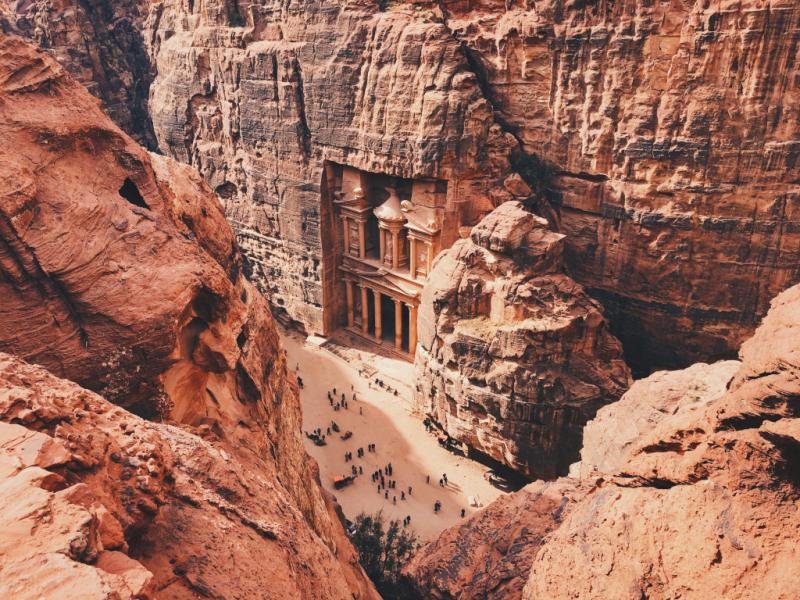 The “Pink City” and the ancient capital of the Nabatean kingdom is one of the most famous sights of Jordan. Still would! Carved directly into the rock more than two thousand years ago, Petra is included in the UNESCO World Heritage List and is considered one of the new Seven Wonders of the World. But the real fame was brought to her by the Spielberg blockbuster about Indiana Jones, which showed the ancient monumental structures on the big screen. & nbsp;

There are more than 800 historical objects in Petra. By the way, she is also considered one of them. To get into the city, you will have to buy a ticket for 55 JOD (about 4,666 rubles) per day.

—  The Gates of Petra is a sandstone canyon about 2 km long with carved rock bas-reliefs.

– The majestic palace of Al-Khazne, carved into the rock in the 1st century AD.

– Ad-Dair Monastery is a Nabatean rock temple, 45 m high. To see it, you will have to overcome a staircase of 800 steps.

The only beach resort in the country on the Red Sea coast. You can swim here all year round: even in winter, the water does not fall below 22 degrees, and in summer the heat comes only in the afternoon. Aqaba is the real capital of diving, there are as many as 6 diving centers where you can get training according to the standards of PADI, SSI or BS-AC associations.

Jerash is the second most popular city among travelers and  cool example of Roman town planning. This is a real machine into the past: hundreds of years the city was hidden under tons of sand, excavations here began only 70 years ago. Therefore, all buildings, streets and monuments are perfectly preserved. Traces of chariots were even visible on the stones. 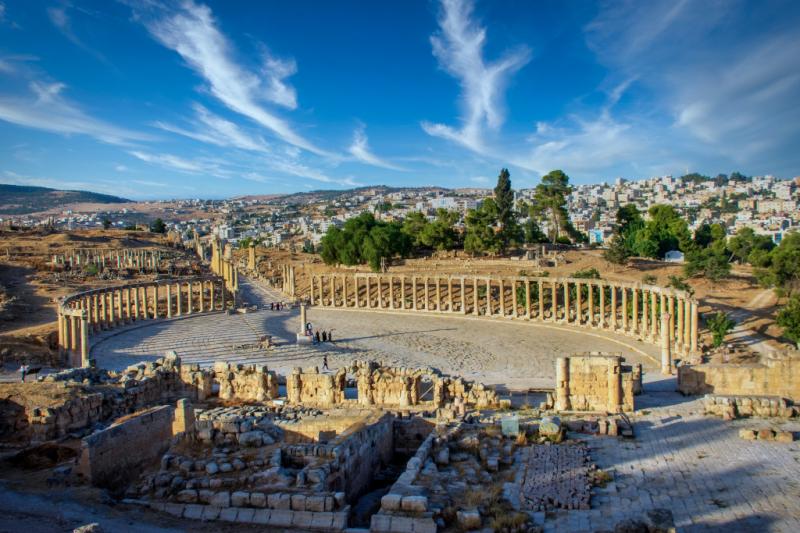 You should definitely see the hippodrome, which was built during the heyday of the city – in the 2nd-3rd century AD. Once upon a time, 15 thousand people followed the races in it. And now they arrange paid & nbsp; performances: chariot races and gladiator fights. Nearby is the Arch of Hadrian, which was built in honor of the arrival of the emperor Hadrian in 129. Take a walk along the main street of the city – the street of colonnades or Cardo Maximus, it has been perfectly preserved to this day. The temple of Dionysus, which was rebuilt into a Byzantine church, and the fountain dedicated to the nymphs, the Nymphaeum, will also impress.

For the city, which is already the XIII century BC. e. was known as the center of the Ammon kingdom, Amman is surprisingly modern and dynamic. Despite the great history of the place, now it is worth going here to feel the vibe of the modern Arab metropolis. From the ancient city, only the citadel on the hill of Jebel al-Kalaa, and the ruins of a small Byzantine basilica and the temple of Hercules remained here. But on the site of poor neighborhoods, malls, business centers, trendy bars and art spaces have rapidly grown – a breath of fresh air after studying antiquities.

The Jordanian National Gallery of Fine Arts will satisfy your craving for art. It contains two thousand contemporary paintings, sculptures and ceramics created by artists from all over the Middle East. 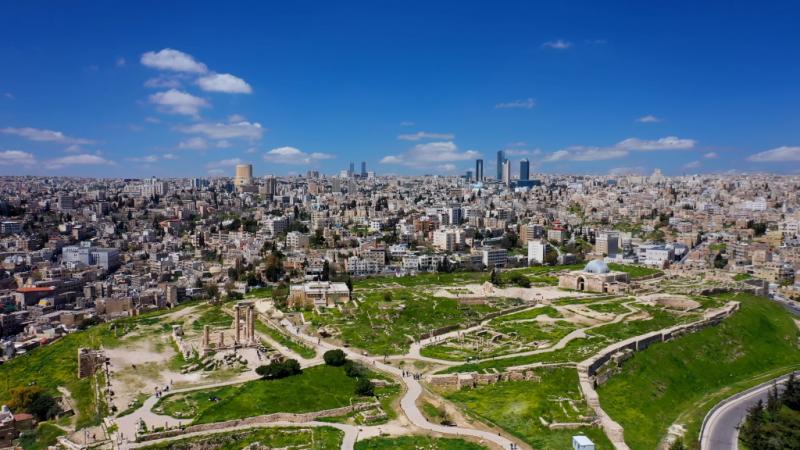 Amman Citadel with new developments in the background

How to get there

This Middle Eastern country is located east of Egypt and Israel, bordering Syria and Saudi Arabia. Jordan has no less wide access to the Dead Sea than Israel.

Now you can get to Jordan only with a transfer, the easiest way to fly is to Amman. The fastest and most convenient option is with Turkish Airlines: 7 hours 45 minutes from Moscow to Amman via Istanbul. Qatar Airways will deliver via Doha in 11 hours 35 minutes, TAROM via Bucharest in 19 hours. From Amman Airport, you can reach the city in 1 hour.

You can move between cities within the country only by buses, the most comfortable ones are from Jett. The exception is Aqaba. You can get to the seaside resort from the capital by plane of the national carrier Royal Jordanian Airlines. There is a railway, but trains do not run: they were canceled due to the war in Syria.

It is best to travel to Jordan with cash dollars, which you can exchange for local currency – dinar (equal to 100 piastres). There may not be as many exchange points in resort towns as we are used to seeing, for example, in Turkey, and therefore we advise you to exchange a certain amount immediately at the airport.

Russian tourists can obtain several types of visas to Jordan:

There is also a Jordan Pass, in Jordanwhich is both a visa and a pass to the most popular tourist attractions. This pass can be issued online.

What the Jordan Pass includes:

It is worth remembering that Jordan Pass only suitable for those tourists who plan to stay in Jordan for more than 3 nights and less than 30 days per trip.

There are two high seasons in Jordan at once – from April to June and September to December, although, frankly, almost all year round in this country is a beach, because the water temperature in the sea is above 20 degrees Celsius.

From June to August daytime temperatures can reach 40°C, which can be too hot for excursions and city breaks. And another important point: dust storms can occur in Jordan in the summer.

But autumn in Jordan is a great time (as great as perfectly warmed water in the sea), and not only for a beach holiday. This time can be devoted to visiting Petra, for example.

From December to February, we would advise you to beware of cold nights and check the forecast before your trip.

Buses, taxis are available in Jordan. Buses in the country are very convenient and comfortable because they are equipped with air conditioning.

Taxis in Jordan can be called at the hotel reception or at the parking lot. Usually taxi drivers use fixed rates depending on the location, but at night you will probably have to pay more. 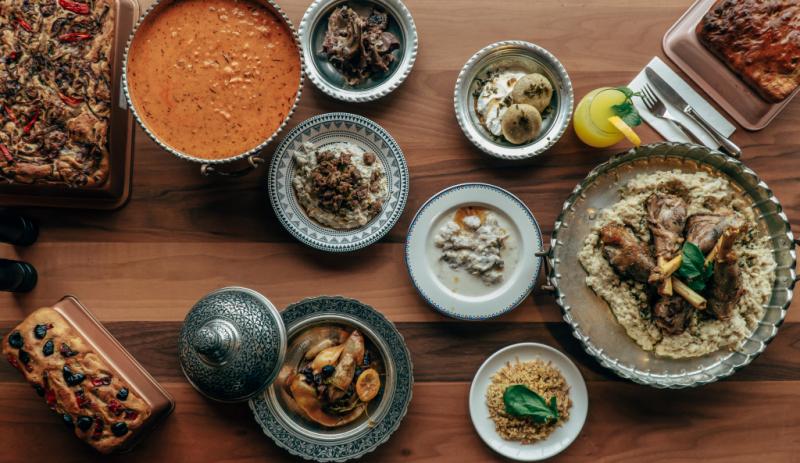 The cuisine in Jordan is full of spices

Jordanian cuisine is inspired by Arabic culinary traditions, but not entirely faithful to them: there are not so many peppers and spices in local dishes. But they often add mint, lemons, onions, olives and pine nuts. The top dishes of the locals are falafel and hummus, stew, pita bread of various types and kmage flatbreads, which are used instead of spoons. From meat here they eat chicken, lamb or veal with stew and various salads for garnish.

Be sure to try the sweets – they are considered the best in the Arab world.

Must-try: baklava with pistachios, guava dessert “zhavafa” and “canafa” with cheese. Authentic Jordanian cafes are everywhere. But if you want haute cuisine & nbsp; or something more casual, then head to the trendy districts of Amman. Aqaba is famous for its fish restaurants, and not far from Jerash, you can try bread from traditional stone ovens.

An interesting point is that alcohol is not prohibited in Jordan. In the resort of Aqaba, alcohol can be bought in many places, in other cities it is available in restaurants, bars.

Jordan is an interesting and non-trivial country, where a very diverse vacation is available, and you can enjoy both the historical and cultural heritage and a pleasant vacation at sea, and a vacation in the fall is doubly beautiful, especially when the weather gets colder in Central Russia.

Go on an adventure with YouTravel. me, stay home.