The main asset of the small Caucasian republic is, of course, the mountains: Ingushetia is located in the foothills of the Greater Caucasus Range, between Georgia, Chechnya and North Ossetia. Here, snow-capped peaks alternate with deep gorges, pine groves give way to alpine meadows, and stormy mountain rivers rustle in dense forests. But pristine nature is far from the only thing that deserves attention in Ingushetia. “Subtleties” counted at least 6 more reasons to come to the smallest, but very interesting region of Russia.

The hallmark of mountainous Ingushetia is hundreds of stone towers built between the 10th and 18th centuries. The whole life and culture of the Ingush is inextricably linked with these structures, and the very name of the people is translated as “inhabitants of the towers”. Slender battle towers propping up the sky look especially picturesque; residential buildings are wider and lower. The highest towers (25-30 m) can be seen in the village of Erzi, surrounded by stone walls, and one of the most beautiful architectural complexes is in the village of Vovnushki: here stone buildings literally grow out of impregnable rocks. In the Dzheirakh region, the ancient city of Tsori with military and residential towers, crypts and a mausoleum has also been preserved.

2. Meet the summer on the sacred mountain

On the border of Ingushetia and North Ossetia, the table mountain Myat-Loam rises, which is clearly visible from the capital of the republic – Magas. From a height of 3080 m, views of Elbrus and Kazbek open up, as well as a grandiose panorama of the Greater Caucasus Range. From time immemorial, Myat-Loam has been considered a sacred mountain: on its flat top stands the ancient pagan temple of Myat-Seli, where the ancestors of the Ingush prayed to the deity of fertility and celebrated the day of the summer solstice. Nowadays, on June 22, an annual folklore and ethnographic festival with dances and treats takes place here.

Although the majority of the Ingush are Muslims, they revere the Tkhaba-Erdy temple as a national shrine. This is the oldest Christian church in Russia, built back in the 8th century on the site of a pagan sanctuary, which is still reminiscent of a fence with pre-Christian symbols and cup stones under it. Local residents not only performed religious rites here, but also jointly resolved controversial issues – until the deportation of 1944, a council of elders met in Tkhaba-Yerdy. The religious building was rebuilt more than once, and it differs from other temples of the North Caucasus by its large size and rich decor. .tonkosti.ru/sized/f550x700/6n/h2/6nh23rc4jzoc844080ww0kgw0.jpg” media=”(max-width: 549px)”> 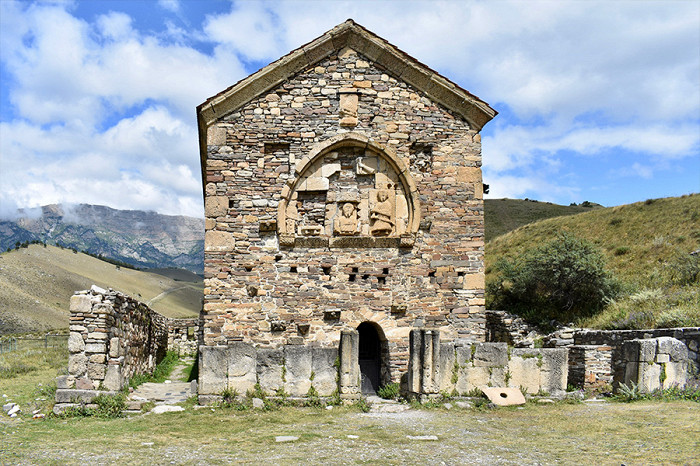 In the south of the republic, not far from the turbulent Armkhi River at an altitude of 1500 m, there is a ski resort of the same name, equipped with two tracks: one for experienced skiers, the other for beginners. Hotels, cottages, a restaurant, a paintball club and a rope town “Mowgli” are located in a pine grove, and a cable car leads to the top. The Armkhi resort is open all year round: skiing is available here from November to April, the rest of the time cycling, swimming, tennis and wellness treatments in the spa center are available.

Back in the 19th century, near the village of Srednie Anchaluki, a unique source of mineral water was discovered, the composition of which is close to the famous Borjomi. Today it is produced under the Anchaluki brand and supplied to 15 regions of Russia, but it is most useful to drink it right on the spot. It is poorly mineralized, does not contain organic substances and harmful impurities, is useful for metabolic disorders, diseases of the liver and gastrointestinal tract, and it is she who is considered one of the sources of Ingush longevity.

The culinary symbol of Ingushetia is chapilgash– flat cakes made of thin dough on kefir stuffed with potatoes, pumpkin, cottage cheese or cheese with greens, smeared on both sides with melted butter. No less popular are cornmeal cakes, which are called siskal here and are served with cottage cheese and sour cream. The basis of the Ingush cuisine is meat dishes, for example, khaltam dulkh (meat with dumplings). It is washed down with a strong broth made from beef, lamb or chicken.