India is not only the white sandy beaches of Goa. This is colorful Delhi and starry Mumbai, the treasures of the Golden Triangle and original bazaars – in general, what you definitely need to see at least once.

And there are always a lot of questions about India, and we have collected the most exciting you to ask them to travel expert Alexei – a real ambassador of the country and its spicy and vibrant culture.

Recommendation from a travel expert: Golden Triangle is the best place to start (Delhi, Jaipur, Agra). If you have time, you should definitely visit Varanasi and Mumbai.

Bright, multinational and woven from contrasts. Mosques here coexist with Buddhist and Hindu temples, reflected in the domes of Christian cathedrals. And next to the market of the Old City, the shopping centers of modern New Delhi feel comfortable.

You can walk around the capital for an eternity – & nbsp; It seems that there are attractions everywhere. We recommend doing so, but first, be sure to evaluate these must-sees. Start with the tallest brick minaret in the world, the Qutab Minara. It is a unique monument of medieval Indo-Islamic culture and a UNESCO World Heritage Site. Next to it is another miracle – a seven-meter pillar forged from meteoric iron in the 4th century BC. Explore  amazing beauty of the mausoleum of the times of the Great Moghuls, the tomb of Humayun. Look at the local “Arc of Triumph” – the gate of India and the Lotus Temple, which really looks like a flower.

Thanks to the Taj Mahal, Agra has become one of the most popular tourist destinations. But you can see here not only the famous mausoleum. Agra has preserved its medieval appearance well: there are many narrow streets with shops of leather goods, silver and gold, ancient and beautiful architecture. See the Red Fort, a moon-shaped sandstone fortification, visit Fatehpur Sikri, the city of mosques and the Little Taj, or the tomb of Itmad-Ud-Daula. But be careful: locals love to profit from travelers, especially in tourist areas. For example, a waiter will raise the price in a cafe a couple of times, and a taxi driver will wind up the meter. There are a lot of pickpockets here, and even specially trained monkeys can rip off decorations and run away. 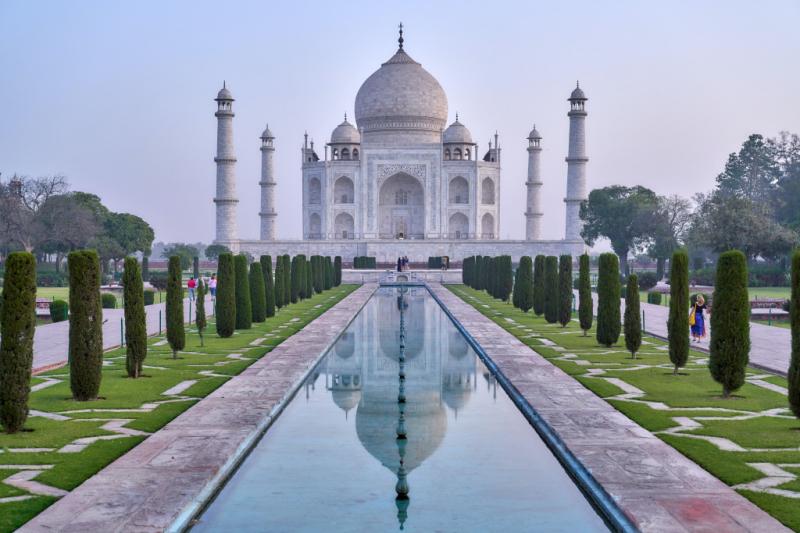 The pearl of India, the incomparable Taj Mahal, unsplash

Or Pink City. So it was nicknamed for the old quarter, where most of the buildings are painted in pink and terracotta tones. According to all the canons of ancient Indian architecture, Jaipur was divided into nine rectangular sectors and still retains its geometric layout. The main attractions of the city are also associated with architecture. The main one is the city palace complex, which includes buildings with marble carvings, and gardens in the spirit of English parks, and small courtyards made of pink stone. The visiting card of the old city is the Palace of the Winds, intended for the harem of the Maharaja.

Together, Delhi, Agra and Jaipur make up the Golden Triangle route.

The locals stubbornly continue to call it Bombay. It is the capital of India and, of course, Indian cinema – Bollywood. More films are produced here every year than in any other city in the world. It is worth seeing the island of the Elephant with images of Shiva and strolling around the Kala Goda area, where most of the city's galleries and museums are located. Be sure to check out the Chor Bazaar flea market and walk to the Dhobi Ghat quarter to see how thousands of washerwomen wash their clothes in stone baths. But it’s better not to take pictures – they don’t like tourists here.

1. Mausoleum  Taj Mahal, built by Shah Jahan in memory of his beloved wife

The most convenient way to travel between cities is by plane. The main air carriers within the country are Alliance Air, Alliance Air, Star Air, TruJet. The national carrier is Air India. Despite the fact that mostly low-cost airlines fly, the flight is not a cheap pleasure. However, now prices are often comparable to high-class train tickets. 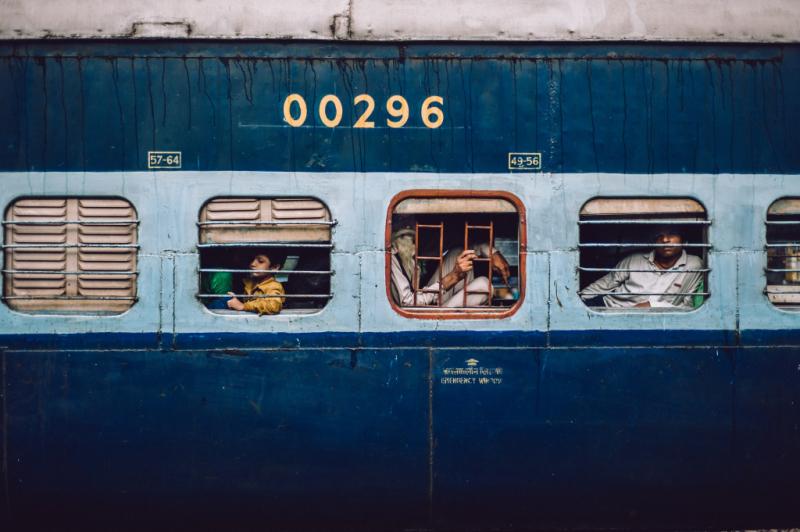 Railway communication in India is well developed. There are several types of trains:

The rest of the accumulators usually do not have a name. Classes in them are different: there are both seated with air conditioning and sleeping without. In some cases, you even need to take your own bed linen with you.

By the way, tickets for non-air-conditioned carriages are sold without seats. So be prepared to share your seat with a couple more people.

Tickets for commuter trains should be taken only at your own peril and risk: they have wooden benches, no toilet and air conditioning.

You can buy tickets directly at the station. At large stations there are special ticket offices for tourists, so you don’t have to stand in a long line. If you are going to travel a lot by train, it is more profitable to take the Indiarail Pass.

But the most popular form of transport in India is still buses: the ticket is cheaper, they run more often, and you don’t have to fight for a place. There are two types of buses: public and private.

State-owned ones connect large and closely located cities, run every 15-30 minutes, tickets for them can be bought directly at the box office.

Private buses run according to their own schedule and leave from different stations. In addition to the standard ones, tourist buses (with soft seats and free water) and slipper basses (with lying places) also go around India.

Shuttle buses run in almost all Indian settlements. Major cities have subways. Taxis, like buses, are public and private. The first, as a rule, are black and yellow and black and green old Ambassador cars or  Mahindra jeeps with blue stripe and tourist lettering. The second are white Ambassador cars or small Tatas. It is better to agree on the price of the trip in advance, and do not hesitate to bargain.

The most authentic Indian public transport is rickshaws. This is a small two-wheeled double carriage attached to a bicycle or motorcycle. You can easily find them at all local attractions or just catch them on the street. 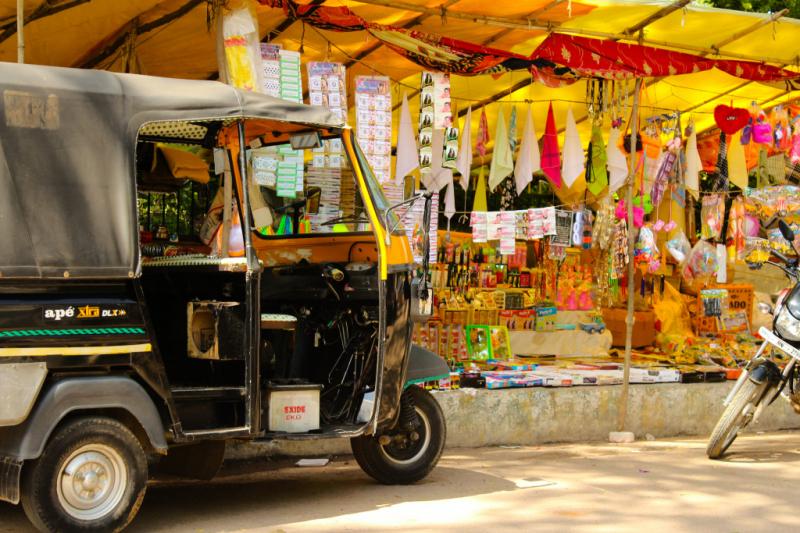 It's better not to rent a car and drive yourself: the roads are narrow, there are many road markings no, the traffic is crazy, plus  Indians are not accustomed to following the rules of the road.

Travel expert recommendation: Indian cuisine is one of the best in the world. Be sure to try paneer cheese in all variations, tandoor chicken, all kinds of flatbreads and, of course, spiced tea.

There is no single traditional Indian cuisine – it is different in each state of the country. Climate and religion make significant differences: Hindus do not eat beef, Muslims do not eat pork. In the north, meat is often served, in the south, vegetables are held in high esteem, in the west, fish.

Most of the inhabitants adhere to the principles of vegetarianism. The most popular products: rice, vegetables, bread products, legumes, fruits, milk. Some add eggs and fish.

In the top of fast food – dosa. This is a huge pancake made from lentil and rice flour, which is baked only  one side. The filling is placed inside. In masala dosa, it is & nbsp; boiled potatoes with a huge amount of onions and spices, in cheese dosa – cheese, in egg dosa – eggs. The pancake is served with several types of spicy sauces.

Another street food star is samosa. As in Russia, this is a triangular pie, only here it is cooked without meat. The filling is potato slices, peas, carrots and even dried fruits.

If your stomach does not like experiments, take a sandwich with an omelet – beaten eggs with spices. True, instead of a piece of bread, they give a bun here.

A set meal here is called a thali. It consists of rice, flatbread, bean sauce and various cooked or fresh vegetables.

The king of meat dishes is biryani or local plov. The filling for it is fried in ghee with onions and spices, and then simmered on a fire. We also recommend palak paneer (cheese in spinach sauce), chicken taka masala (grilled chicken in spicy masala sauce) and malai kofta (meatballs with sauce).

Recommendation from a travel expert: Russian bank cards work, but not all. For example, the UnionPay card from Rosselkhozbank works. It is better to take cash dollars, it will not be difficult to exchange them.

Bright and colorful India can scare novice travelers, but it will definitely appeal to those who are looking for new experiences . In order not to miss the treasures of the country in the colorful variety, it is always easier and definitely more productive to travel with locals or experts on the country. For example, with travel experts YouTravel.me.

Don't put off adventure for tomorrow, the world is big and incredibly diverse.