Croatia – one of the few European countries with which we have established air communication. Planes from Moscow are already flying to Zagreb, Split, Pula, and in the summer they promise to add more flights to Croatian resorts.

If you are lucky enough to relax this summer on the Adriatic coast, catch a selection of must-see places in Dubrovnik if you've watched Game of Thrones. If you haven’t watched it, catch it anyway, because the main locations of the series are also the main attractions of the “Pearl of the Adriatic”.

Rules for entering Croatia in the summer of 2021

In early June, the operational headquarters allowed Aeroflot put 2 regular flights a week from Moscow to Zagreb. In addition, the national carrier plans to add passenger and cargo flights to:

Except for Aeroflot Nordwind and S7 now fly to Croatia, but their flights are cargo-passenger, that is, not guaranteed: the airline receives permission for each such flight separately.

You can enter Croatia with a PCR test done no more than 72 hours before departure, or with a Sputnik V vaccination certificate. printed in English. Children under 12 years of age do not need tests and certificates.

The country takes the safety of tourists seriously: they launched a special Safe Stay in Croatia project, within which “safe” places are marked with special signs. hotels and restaurants that comply with all sanitary protocols. More than half of all tourism workers are vaccinated. 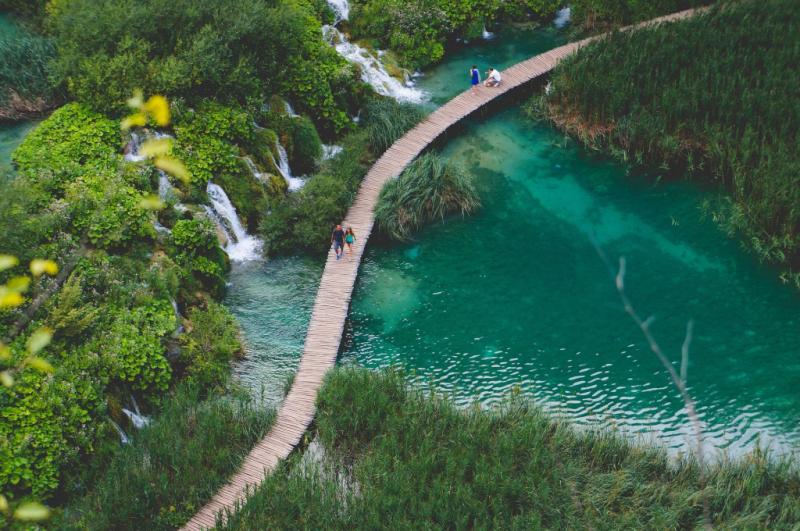 “Game of Thrones” did for Croatia and Dubrovnik what the Lord of the Rings did in its time; for New Zealand. After the release of the series, Dubrovnik has become a mecca for fans of the saga. The number of travelers has grown exponentially. Thematic excursions, souvenirs and shops appeared in the city. To get to the Old Town during the peak season, you had to stand in line (this was the case before the pandemic).

Seven seasons in a row, Dubrovnik was the King's Landing – the capital of the serial state of Westeros. This location moved here from Mdina in Malta, which “played a role” capitals of the Seven Kingdoms in the first season. The Maltese refused to continue filming on their territory, and tourist happiness fell on Dubrovnik.

By the way, in the series «starred» not only the iconic sights of the most beautiful Croatian resort, but also the locals, who were actively used as extras.

If you take a thematic tour in the footsteps of the “Game of Thrones” if you don’t plan to, but you want to see your favorite places live, then here is a list of the main serial locations.

Tip: to make it easier to navigate the city, download a special route in the Maps.me application Game Of Thrones.

Start exploring the main city of the “Game of Thrones” It is necessary with a walk along the walls of the fortress of the Old City. From here, you can see the Blackwater Bay and the whole city in full view, above which, to complete the picture, you need to mentally finish the Red Castle.

Then through the main gate of Pile, against the background of which King Joffrey with guards in the scene of the beginning of the riot met with indignant citizens , throwing insults and stones at him, go deep into the city. Pay attention to the statue above the gate – this is St. Blaise, the patron saint of the city.

To the right of the Pile gate is the fishing harbor: here the royal family escorted Princess Myrcella to Dorne. Stone pier below – one of the iconic photo points: it was here that Sansa Stark watched the ships and talked with Petyr Baelish, and now hundreds of tourists take memorable pictures.

The main and most recognizable location from the – beautiful Jesuit staircase at the church of St. Ignatius in the center of Dubrovnik. She became popular thanks to the climactic episode of Cersei's shameful procession, who had to walk naked through the whole of King's Landing through an angry crowd as punishment.

The Catholic Church sharply opposed this scene against the backdrop of the temple, but the secular authorities resolved the issue in favor of the film crew. As a result, the facade of the real church was covered with shields, a non-existent temple was added in the background, and the episode was filmed.

Located next to Ploče's eastern gate, which also appears in the scene of the shameful procession of the Queen Mother, St. Dominic Street appears frequently in various episodes of the series.

This is where the bustling market is located, the Golden Cloaks kill the illegitimate son of King Robert, and a street preacher calls for the overthrow of the Lannisters.

One of the oldest botanical gardens on the Adriatic, founded in the 15th century, only after the “Game of Thrones” waited for his hour of glory. In the saga he “played the part” gardens of the Red Castle, where the main intrigues were woven and the Queen of Thorns, Lady Olenna Tirel, loved to stroll. Here is the same gazebo where the fate of young Sansa Stark's marriage was decided.

Trsteno Arboretum is located 15 minutes by bus from Dubrovnik. This is a very picturesque place with a 500-year-old aqueduct for watering plants, bamboo thickets, gazebos, fountains and vine-covered galleries where you can take many photos “from the same place”. 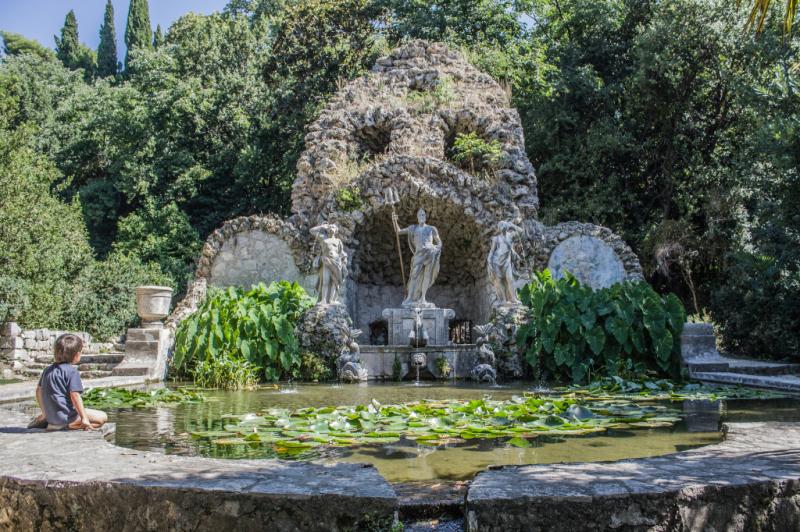 This postcard landmark and symbol of Dubrovnik became the mysterious House of the Immortals, the headquarters of the warlocks in Qarth, for the duration of filming. According to the story, Daenerys arrives here with her khalasar and three newborn dragons, who are kidnapped by sorcerers from the House of the Immortals.

There are 2 observation platforms on the Minchet tower, from where a magnificent view of the city and surroundings opens. The locals even have a proverb: if you haven't climbed to the top of Mincet, you haven't seen Dubrovnik. Well, now I haven't even been to the House of the Immortals. 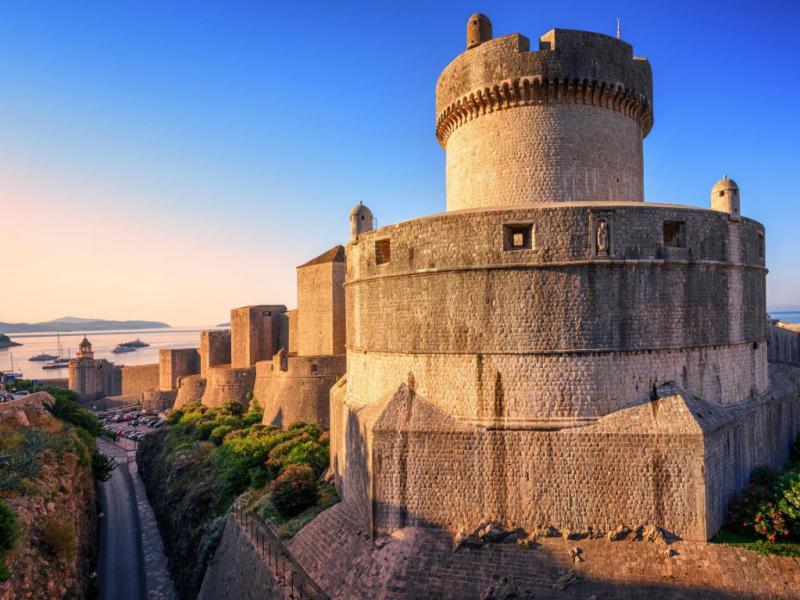 Very funny that the building of the Dubrovnik City Museum in the “Game of Thrones” suddenly became… Littlefinger's brothel. It was here that the Dornish prince Oberyn and the High Septon entertained for five seasons.

However, long before the series, in the 16th century, this building was a large granary, consisting of 15 wells carved into the rock. So the history of the house is very interesting.

The brutal Red Castle, the residence of the ruling house of the Baratheons, whose silhouette dominates King's Landing, is located in the real fortress of Lovrijenac, which is a 5-minute walk from the Old Town.

Many scenes were filmed here, including cult episodes of the feast in honor of Queen Margaery and King Joffrey, who became the last in his life, and Cersei's conversation with Littlefinger, during which she says her signature: “Power & ndash; it's strength.

Above the entrance to the fortress, you can still notice the old inscription: “Non Bene Pro Toto Libertas Venditur Auro”, which in Latin means: “Freedom is not sold for the gold of the world.” – the old motto of the Dubrovniks.

And in the small bay that separates the fortress of Lovrijenac from the city, they filmed the iconic battle scene near the Chernovodnaya, which became the most important event of the second season. 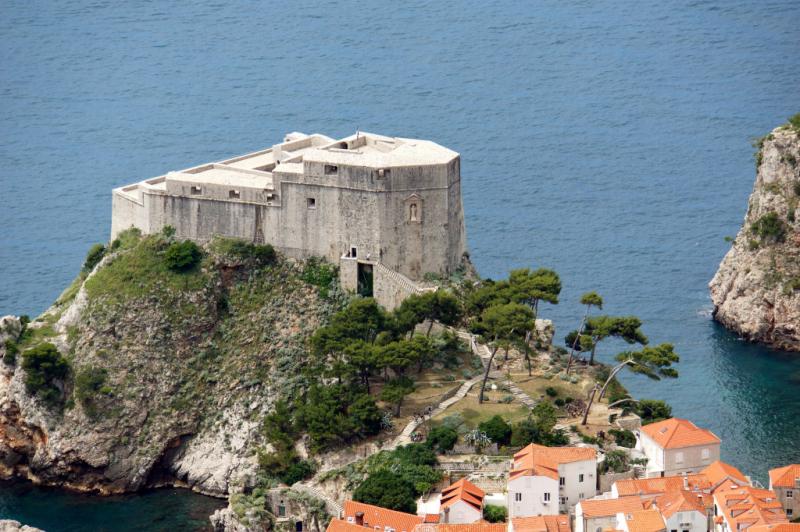 The island of Lokrum, adjacent to Dubrovnik, became Qarth, an oasis city in the middle of the desert, for the duration of filming. Here Daenerys walked with Xaro, and unwanted travelers who were not allowed outside the city gates remained forever in the “Garden of Bones”.

In the monastery on the island of Lokrum, the original Iron Throne is now on display, which the Dubrovnik authorities bought from the film crew groups.

Now Lokrum – one of the must visit attractions for fans of the saga. During the summer, this uninhabited island gets very busy, easily accessible by ferry in just 10 minutes. 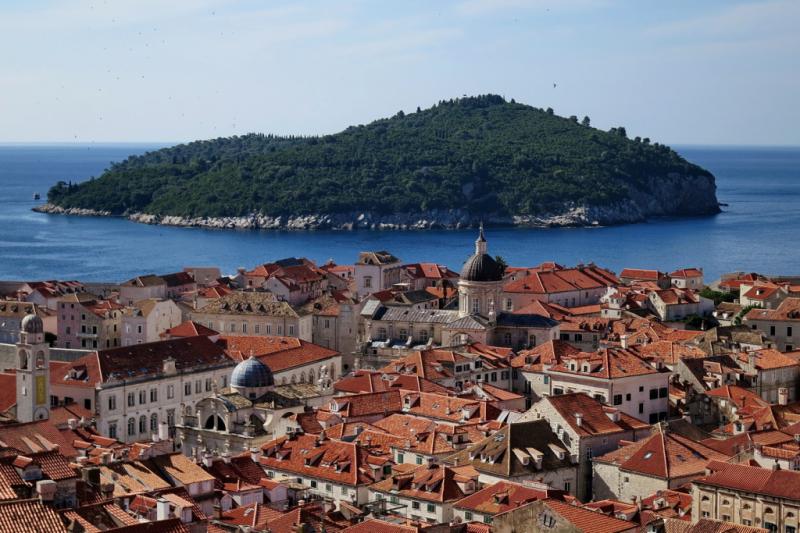 If only the sights of the Game Throne are not enough for you, feel free to choose one of the great author's tours in Croatia.