Staying at airports is more of a forced measure than entertainment and pleasure: a couple of hours waiting for boarding, slightly “diluted” with pleasant shopping in duty-free stores, during which you often have to unsuccessfully look for an empty seat. However, not all airports in the world fall under the category of noisy and boring transport hubs – there are some real gems among them. Landing on a mini airstrip in Madeira, or taking off just short of touching a sheer cliff in Nepal, and landing on immaculately flat ice are all in today's “Subtleties” selection.

The abode of the gods Nepal is the best way to confirm the title of a heavenly country – it is not only located at the very edge of the sky in the Himalayas, but also really makes you think about the eternal directly from the first minutes of acquaintance with the country. Looking out the window at the tiny runway at Lukla Airport, which is almost at the very foot of Everest, it's hard to believe that “this is where we will land.”

Lukla fully justifies the title of the most dangerous airport in the world: a modest asphalt strip that receives planes from all over the world is located at an altitude of 2800 m above sea level, blown by strong winds and often decorated with impenetrable fog. Its length is only 500 m, in addition, one end rests directly on the rock, and the other ends just before a 600-meter cliff. They say that many reach enlightenment right on the plane! dc/bydcpun6leoggc88k0c8ogsgw.jpg” media=”(max-width: 549px)”> 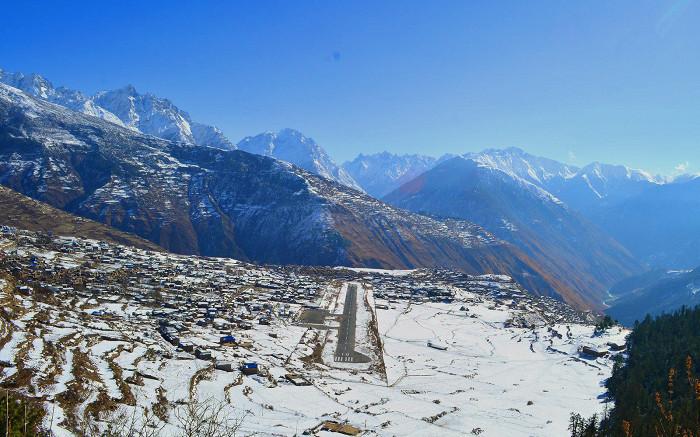 To tell the truth, since Madeira has reconstructed its airport, the opportunities for “aha” when landing have become an order of magnitude smaller. But the current portrait of the Funchal airport runway can cause surprise and distrust at the same time.

What is surprising here: the “tail” of the runway is placed on concrete supports directly into the Atlantic Ocean, and when landing, an illusion of complete “immersion” into the depths of the sea is created. Among other things, the landing approach requires a sharp descent and skillful maneuvering, so that thoughts about the frailty of existence still flicker in the minds of passengers.

Close your eyes in Courchevel

A mecca for lovers of skiing and parties with a golden flair, Courchevel generously gives adrenaline to tourists arriving in the snowy expanses of the Three Valleys long before getting up on skis. Courchevel Airport is the highest European airport with an asphalt runway: it is located at around 2010 m above sea level. It is located, of course, surrounded by mountains, which strive to “please” pilots with a sudden change in weather. If this is not enough for you, we inform you the main thing: the Courchevel runway is partially located on the slope of a mountain with a not weak slope. Airplanes land uphill (and thus quickly slow down), and start downhill, which is why they instantly accelerate to takeoff speed. So the main thing that people who arrive in Courchevel think about is not the degree of snow cover on the slopes, but “I wonder if we will make it to the horizontal part of the strip?”.

The picturesque island of Saba in the Netherlands Antilles lazily splashes in the turquoise waves of the Caribbean Sea. A delightful beach holiday, luxurious nature and remarkable diving are its main tourist features. However, in our digest Saba “lit up” not at all for this reason. The island's airport is included in all aviation directories as having the shortest runway in the world – its length is only 400 meters. The airport accepts only small propeller planes landing here from neighboring islands – Sint Maarten and St. Kitts and Nevis. To make the landing even more memorable, nature provided the airport with a mountain at one end of the runway and a steep bank at the other.

Asphalt and concrete are by no means the only airport runway surfaces in the world, as evidenced by the airport with the romantic name Blue Ice. It is located in Antarctica and exists only a few months a year, while the relatively mild Antarctic summer allows tourists to admire the endless snowy expanses of the White Continent.

The strip is prepared in early October, and already in December the ice becomes not strong enough to withstand transport planes arriving here from Argentina and Chile. Actually, the preparation of the airport requires minimal effort: only to clean the icy surface from snow. By the way, laid up planes slightly push through even such strong ice, plunging the landing gear into a transparent abyss. Yes, it's also the most expensive landing in the world – a one-way ticket costs 10,000 USD! tonkosti.ru/sized/f550x700/2u/ai/2uaic5kdfv6ss4ws8gw4c8gko.jpg” media=”(max-width: 549px)”> 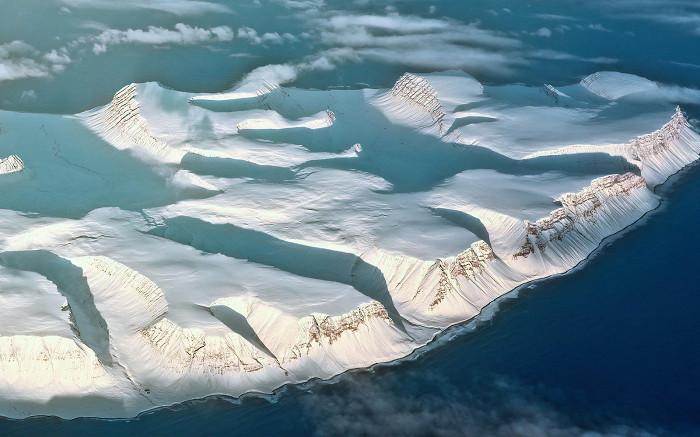