Georgia beckons with mountains, sea, amazingly delicious food and incredible history. How not to get lost on a trip and have time to visit all the iconic places? Use our instructions.

You can get to the fortress by funicular, while admiring Tbilisi from a height. The fortress walls are partially destroyed, in the center – & nbsp; a functioning church of St. Nicholas, built in the 20th century on the foundations of an ancient church of the 12th century. There is also a huge metal monument in the shape of a woman, symbolizing the greatness and hospitality of the country.

A 700-meter high mountain in the center of Tbilisi is a great place to enjoy the view of the city. You can take a cable car up here or have some light hiking, and then relax in the park at the top, having a picnic at sunset. 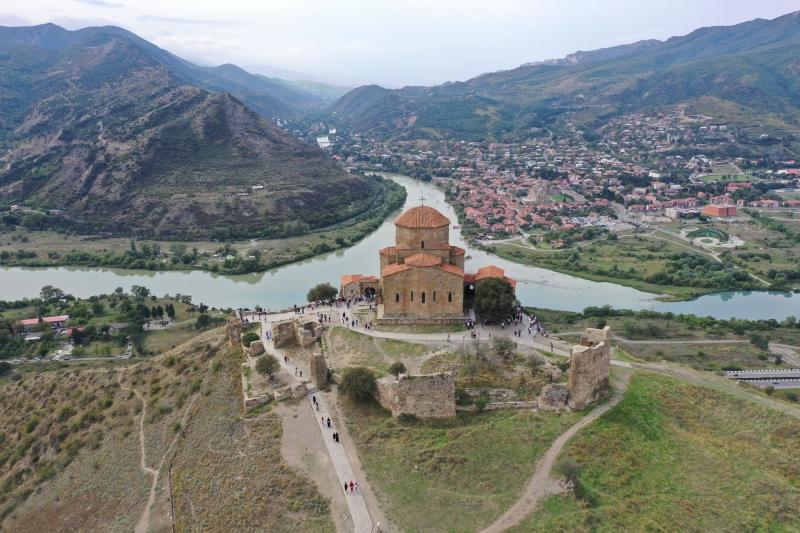 20 kilometers from Tbilisi, in the ancient city of Mtskheta, on the very edge of the cliff, there is a monastery of the VI century. You can see it from all surrounding points. You can't get here by public transport, but you can by car. You can also drive to the foot of the mountain and make an hour-long ascent.

The main Georgian temple with a great history and unusual architecture. It is also located in the city of Mtskheta. It was built on the site of other churches, partly using their intact elements. Therefore, the temple does not have any symmetry, the columns inside are of different sizes and shapes.

6. Arch of Friendship of Peoples 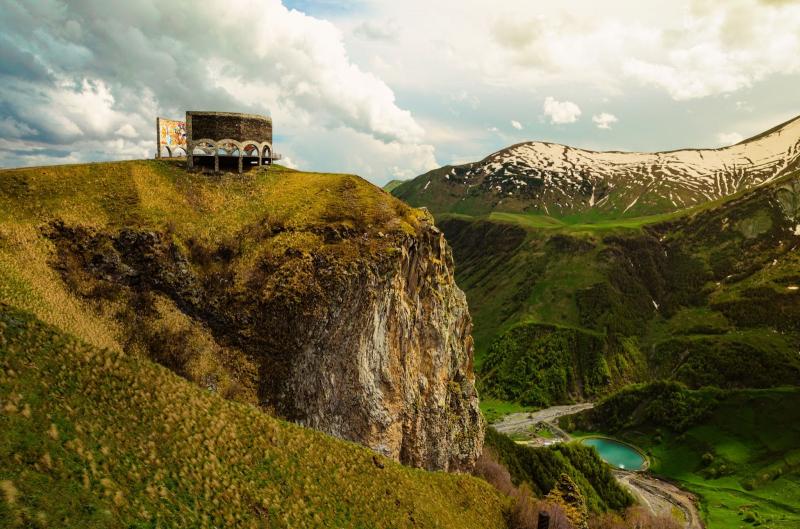 The arch is located 120 kilometers from Tbilisi, on the road connecting Russia with Georgia. In fact, this is not an arch, but a large panoramic observation deck with a view of the mountains.

In the Kazbegi region, high in the mountains, at an altitude of more than two thousand meters above sea level, there is a secluded Gergeti monastery. In winter there is a lot of snow, and in summer horses and sheep graze on green meadows.

The complex of ancient monasteries is located on the border of Georgia and Azerbaijan. There are 20 monasteries in the rocks and about a hundred cave cells where monks used to live. This place is   an amazing symbol of the past with inscriptions on the walls that have survived to this day.

The cozy tourist town of Sighnaghi is located 120 kilometers from Tbilisi. Only one and a half thousand people live here, but this place is especially popular among tourists. In 2005, Sighnaghi was restored and landscaped so that now it looks like a small European city with beautiful streets, cafes, shops and mountain views.

Monastery in Kakheti — point, from which Christianity began to spread throughout the Georgian land. Nekresi is located on a mountain, like many other monasteries, and under the mountain lies the Alazani Valley with vineyards. The famous Georgian wine can also be bought near the monastery.

An ancient castle in Kakheti, on the territory of which there is a temple with frescoes of the 16th century and a museum that will tell you the history and legends of the fortress: it was almost completely destroyed and then rebuilt. It was closed during the Soviet era, but is now available for visiting.

The temple and monastery in Kakheti is easy to spot from afar: the tower and pointed dome are visible from other hills and from the access road. Like other Georgian monasteries, Alaverdi was closed, destroyed, converted into a cowshed. But now it functions and receives parishioners, and the monks living on its territory make very tasty wine. 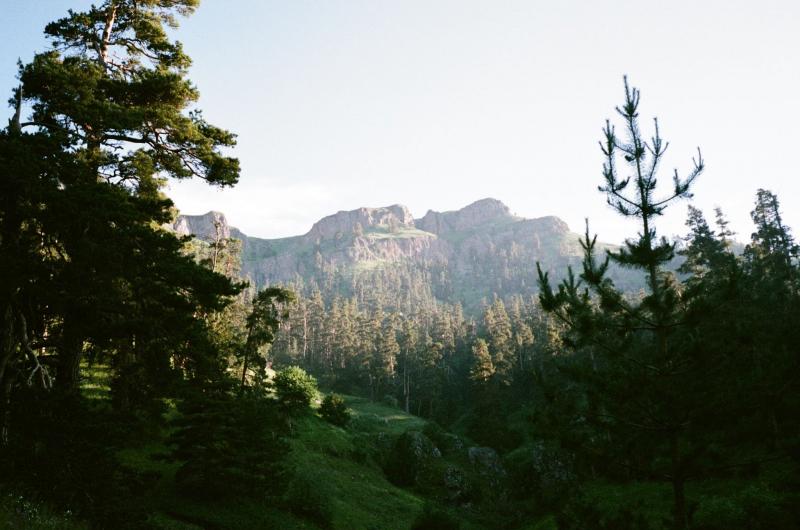 A large and beautiful green park in one of the most famous resort regions of Georgia. Here you can ride the funicular, look at the river, swim in the therapeutic pools in the summer, have a snack and, most importantly, drink mineral water and take some with you straight from the source.

Incredible ancient city in the rocks, whose history begins at the end of the second millennium BC. Now –  it is a monument of history, but people lived here in the 19th century. You can get to Uplistsikhe by train from Tbilisi, the journey will take a little over an hour.

15.  The Stalin Museum in Gori

It so happened that Iosif Dzhugashvili (Stalin) was born in the city of Gori. In 1937  A museum was built here, which is still in operation. The museum will be of interest to those who want to learn more about the phenomenon of the Soviet leader, his way of life and life. There is even a train car in which Stalin traveled around the USSR. 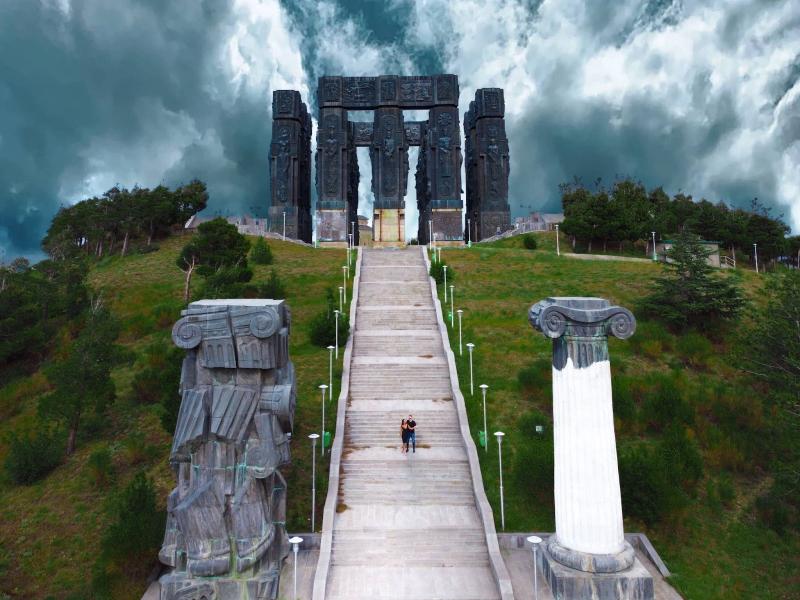 The huge monument, designed by Zurab Tsereteli, consists of columns, statues, a small church and a huge staircase. It is located not far from Tbilisi, only thirteen kilometers away. However, getting here is not easy, you need to go by car or taxi. You can also walk here, but you need to be ready to climb to a height of 120 meters.

Another cave city-monastery four hours drive from Tbilisi. The city stood for a hundred years and was destroyed by an earthquake, but now about a hundred buildings with ancient frescoes and wall inscriptions are available for visiting.

You can get inside the ancient cave only by purchasing a group tour, which includes a boat trip through an underground reservoir with stalactites hanging from the ceiling of the cave and modern lighting.

The temple is located in Kutaisi, it was built in the 20th century and for a long time was the center of Christianity in Georgia. But it was destroyed almost completely: first by the Turkish troops, and then by the Russians. The temple you can visit today is  an example of a good and high-quality restoration, which was completed recently, in 2012.

The Okatse area has an impressive natural park with waterfalls. The number and intensity of waterfalls varies depending on the season and snowmelt. And Okatse Canyon strikes with crystal clear blue water. In the warm season, you can swim here from special baths.

From Kutaisi by car or minibus you can get to a unique place – & nbsp; Martvili Canyon. These are gorges in the rocks, whose age is millions of years old. At one time, the remains of dinosaurs were discovered here, and now you can ride a boat between the rocks on turquoise water among greenery and waterfalls. Nearby is an ancient cruciform monastery made of yellow stone.

Argo in Batumi —  the longest cable car in Georgia. For a fifteen-minute ride, you will have time to enjoy the view of the mountains and the sea, the Ferris wheel, the port and the promenade. On Mount Feria, where the funicular will take you, there are cafes, restaurants, an observation deck and a church.

The highest and most impressive waterfall in Adjara – & nbsp; Makhuntseti is less than an hour's drive from Batumi. Nearby is the thousand-year-old arched bridge of Queen Tamar. Not having a single support, the bridge managed to resist and withstand all the numerous earthquakes that were at different times on this earth.

Adjara —  is an autonomous republic within Georgia, centered around the city of Batumi. This is the most Muslim part of the country. Adjara is conveniently located between the Black Sea and the mountain range, so the nature here is very diverse. In the seaside part of the region, in addition to Batumi, there are no less beautiful resorts – & nbsp; Ureki, Kobuleti, Chakvi and Makhinjauri.

Ancient towers keep many secrets, it is still not known for certain why they were built from the eighth to the thirteenth century, but there are many such towers on the territory of Svaneti. The towers are not intended for human habitation and defense, there is a theory that they were built to protect against snow avalanches, but it has not been proven.

The observatory is located at an altitude of 1700 meters above sea level and has been operating since 1932. Observations of objects of the solar system were carried out here back in Soviet times. But now the observatory has been updated and restored, new optics have been purchased and the territory has been equipped so that everyone can visit this object. On the territory there is a cafe, a shop and a co-working area with a library.

The unusual view of the old mining town of Chiatura takes any traveler back in time. The city is surrounded by mountains and the only way to get or transport cargo from one peak to another is & nbsp; by ropeways. There are many such roads here and they are all very dilapidated, many of them are no longer functioning, it is not safe to use them, but some of them you can even ride. 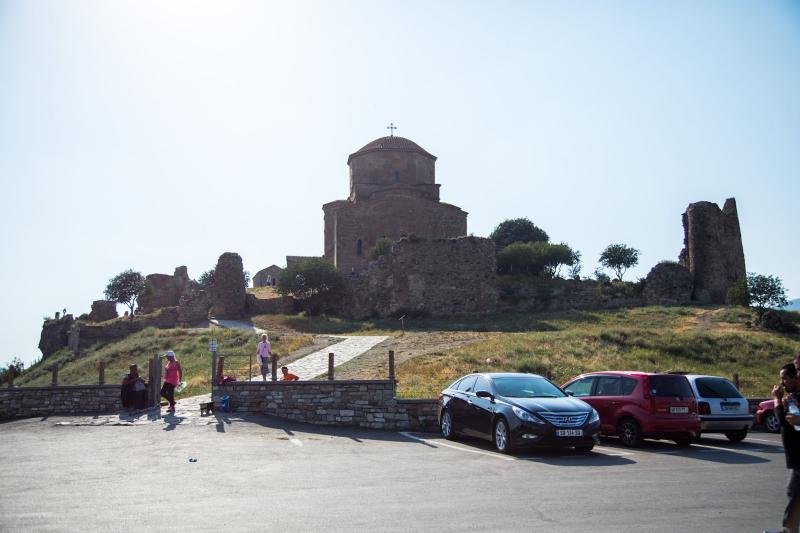 Twenty kilometers from Tbilisi is the center of Georgian pilgrimage —  city ​​of Mtskheta. In the 5th century BC, this place appeared and preserved many monuments of the pre-Christian era. Later, many temples were built here. In the Middle Ages, Mtskheta was the center of Georgian Christianity. Now it is a city where 8000 people live and where a huge flow of tourists constantly stays.

A modern pedestrian bridge in Tbilisi connecting the two banks of the Kura River, the old and the new part of the city. This bridge will not go unnoticed —  in the evenings it is abundantly illuminated. Illumination broadcasts in Morse code the names of the elements from the periodic table of Mendeleev, but only those of which the human body consists. The bridge of peace will not only take you from one part of the city to another, but will also provide a magnificent view of the city.